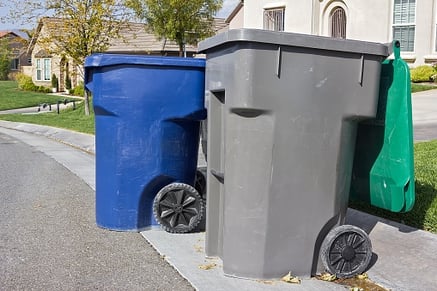 Your homeowners association probably has its share of complaints or concerns from members. It may be parking, barking dogs, or a defiant neighbor – the possibilities are actually endless. Below is a real question submitted by a member of a homeowners association relating to a rule about garbage cans. Learn how an HOA manager might handle the issue and think about how your HOA board would handle it for your community.

What happens when the HOA has a rule which states garbage cans must be put away 12 hours after pickup but pickup day is Friday? The HOA is closed on Saturday and Sunday so they let people leave garbage cans out until Monday. Monday is when the HOA office opens again. Garbage cans are left out for 4 days. Most put their cans away but some leave the cans out for all 4 days. We don't like looking at the cans. Our rights aren't being considered. Letters are sent out Monday to those who left out cans but Saturday should be the day letters are sent out. The issue is continuing because the issue isn't being dealt with after the 12 hours.

If this garbage can rule is becoming a nuisance the HOA board needs to look at the issue and re-evaluate, but pick your battles wisely. You could simply ask the garbage company to change its pick up day, or you could change the rule entirely. However, the latter will require significant time and effort. Could your HOA board’s time be better spent then changing a rule about garbage cans?

If the Association doesn’t pay for garbage, someone will have to be in charge of enforcing the rule and collecting fines. You can send out a reminder in the newsletter or other communications to start, but you also have the option of hiring an HOA manager to enforce the issue.

Ultimately, everything directs back to you CC&Rs and bylaws. It’s important to revisit them every few years to address the way the community is living. A wise HOA board would put money in the reserves for this task. The governing documents reflect how the people want and do live in your community, so it’s expected they will need to be evaluated and will change too.

It’s not really about the garbage cans. Times change, people change, and communities change. When an issue arises it’s how the HOA board will address it that people will remember. Everyone wants to feel heard and respected – possibly even more so when living in a community association.

Topics: Living in an HOA, Member of HOA, HOA Rules and Regulations